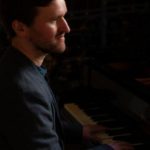 Returning to the UK after some weeks on the Paris scene, Tommy is known for his melodic and virtuosic piano style. For this performance, he will be playing the music of one of his idols, Herbie Hancock. Herbie is famous for his amazing harmonies and has written many beautiful compositions. Tommy has worked with Jean Toussaint, Mornington Lockett, Damon Brown, Phil Robson, Paul Booth, Quentin Collins, and many more.

Joining Tommy for this performance will be Mike Green, from the Midlands. Mike has vast experience performing at small intimate Jazz Clubs such as Ronnie Scotts and The 606 with award-winning groups, to appearing on Prime Time National TV with household names such as Jamie Cullum and Dame Shirley Bassey for the BBC.

Sophie Alloway is a freelance drummer, based in London, working in a variety of musical settings for a wide range of artists such as Clean Bandit, David McAlmont, Mornington Lockett and Jason Rebello. 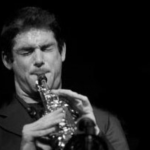 Born in 1975 in Milano, Italy Tommaso started playing the saxophone and studying music at the age of 18. He moved to the United Kingdom in 1994 where he graduated at Birmingham Conservatoire with a Bmus first class honours and later at the Guildhall School Of Music and Drama with a Postgraduate Degree in jazz studies in the year 2000. He has performed with some of the most respected jazz musicians including Billy Cobham, David Liebman, Kenny Wheeler, Stan Sulzmann, Jim Mullen, Jonathan Gee, Paolo Pellegatti, Gianni Giudici. In the year 2004 he collaborated with award winning oscar film composer Dario Marianelli ( ‘Pride and Prejudice’ and ‘ The Atonement’ ) recording music for ‘This Little Life’, a BBC drama for Channel Four.

In 2008 Tommaso was awarded with an Honorary Membership by Birmingham Conservatoire given to him for his significant contributions made across the years within the various branches of the music profession.