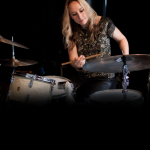 Lorraine Baker’s quartet features Binker Golding on tenor sax, John Turville on piano, Paul Michael on bass and Lorraine herself on drums, playing her arrangements and re-workings of the late Ed Blackwell’s music. Ed Blackwell is a major influence on her playing, and she has enjoyed taking the music in a new direction with this band.
Debut CD “EDEN” released on October 12th