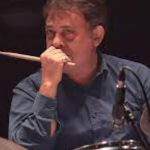 Voted Best UK Drummer 2007 at Ronnie Scott’s Jazz awards and best drummer three times in the British Jazz Awards, Clark Tracey has made numerous appearances on film, television and over 70 albums.
Clark has been a significant feature of the British Jazz Scene for decades. First appearing in the 1970’s with his father’s band Stan Tracey Quartet. He has gone on to be recognised as the best straight ahead drummer around. Over the decades he has been noted for putting together a group of emerging talent band. This one is the latest. It may also be the last as this is both Clark’s 60th Birthday Tour and his final one.

Please be mindful to socially distance yourself from the artists and attendees outside of your group in common areas.
People are advised to wear face coverings when queuing for food or drink.
Hand sanitisers will be available for people to use.
Attendees and artists should check for symptoms of COVID-19 (a high temperature, new and persistent cough, or a loss of/change in sense of taste or smell) before travelling to the event. If anyone you live with have one or more of these symptoms (even if they are mild) they should not attend and should follow the guidance on testing and self-isolation.

Thank you for your co-operation and we hope you enjoy the event.